Officer Had Responded Previously to Residence Where He Was Killed 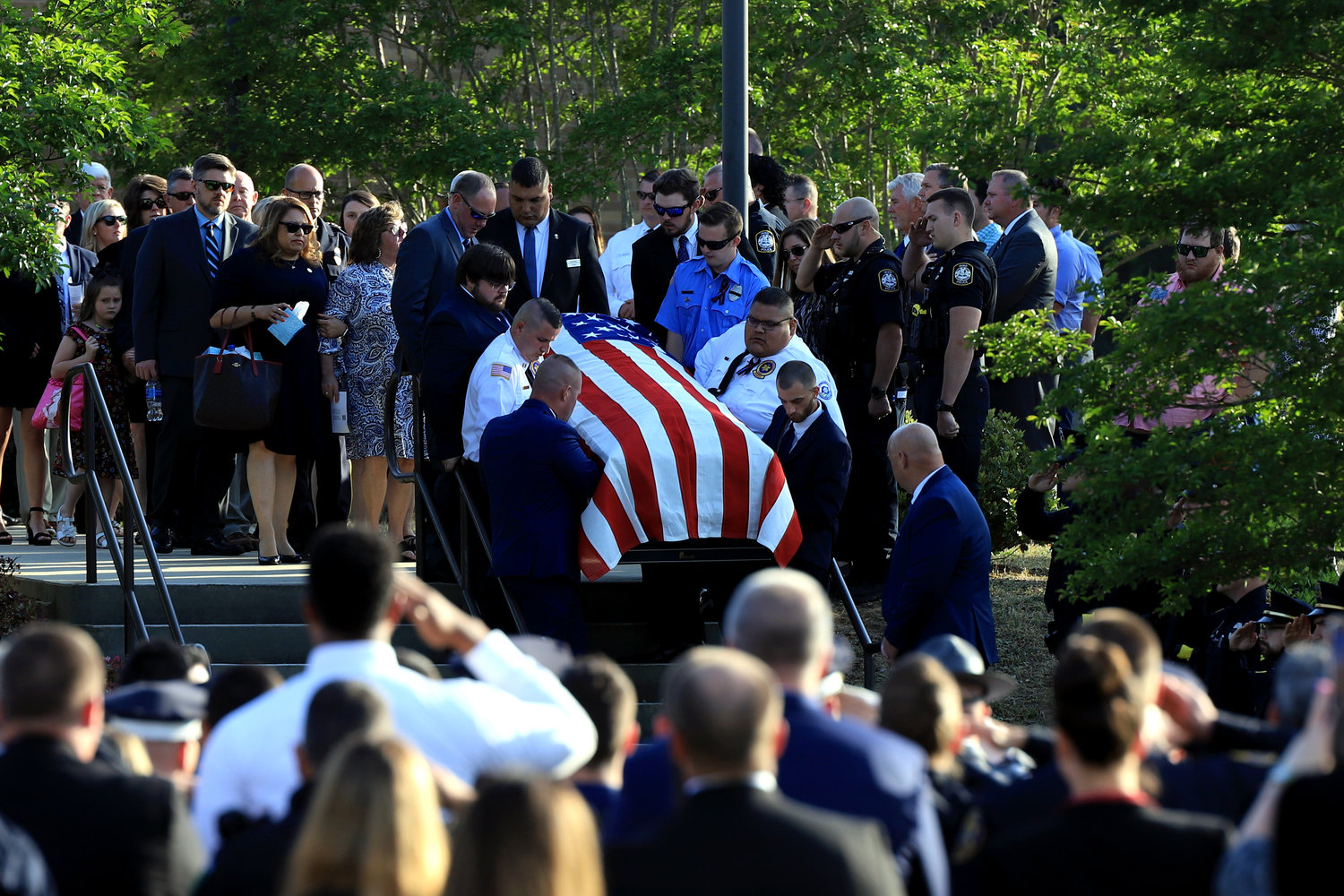 A funeral was held April 28 for Cayce Police Officer Roy Andrew “Drew” Barr, who was gunned down in the line of duty April 24.

The ceremony at Batesburg-Leesville High School was attended by Gov. Henry McMaster and S.C. First Lady Peggy McMaster, Cayce Mayor Elise Partin and members of City Council and law enforcement and public safety from  the Midlands and beyond.

Barr, a 27-year-old K-9 officer, was killed responding to a domestic dispute when suspected murderer Austin Leigh Henderson tracked him and other officers from an upstairs window with a rifle and fired two shots, hitting Barr with the first. Henderson later took his own life after barricading himself inside the house for approximately seven hours. Henderson’s wife and daughter survived the incident.

With people lined up down the steps and into the parking lot, Batesburg-Leesville High’s 1,000-capacity Fine Arts Center, where the funeral was held, was filled about 30 minutes before the service. A nearby auditorium where the service was live-streamed also reached capacity.

Both state Sen. Nikki Setzler, who hails from and represents Cayce, and Cayce Police Chief Chris Cowan spoke at the funeral.

“On Sunday, the unspeakable happened,” Chief Cowan said. “But I tell you sure as I’m standing here, Drew wants us to talk about it. Because he would say, ‘Bo, let’s smoke one and sort it out.’ So let’s talk about it.

“Drew went into the fight along with his brothers to protect the innocent, to stand in the gap for justice. To be honest, I’m angry about what happened and in deep pain. I know I don’t have to describe to anyone here what the pain or anger is.”

The chief closed his remarks by telling the crowd what he thought Barr would say:

“I committed myself and prepared myself to meet God, and I’m okay with it. To meet him at the pearly gates and hear from him, ‘Well done my good and faithful servant.’

“God’s got you. God’s got me, Drew Barr, and we will both be watching to see if you will be that standard that I’m asking you to be on Earth.”

Barr’s body was later transported to a graveside service by a truck from the Monetta Volunteer Fire Department, where he previously served.

American flags were plentiful around the funeral, lining the street in front of the High School, while a big one hung from a crane in front of the property and another big one hung over a street headed to the high school from the ladders of two fire trucks — one from Aiken County (where Barr started his public safety service) and one from Lexington County (where he ended that service).

Away from the funeral, expressions of tribute for Barr and sympathy for the Cayce Police Department and city employees have been plentiful.

Gov. McMaster ordered flags be lowered to half-staff on April 28 in remembrance of Barr.

“Let us reflect on his selfless service and continue to pray for his family and the @CaycePD,” the governor tweeted.

West Columbia Police and other agencies filled in to patrol Cayce streets last week, allowing their neighboring officers a break as they dealt with the incident. .

The April 30 launch event for Steel Paws, a new beer from Cayce’s Steel Hands Brewing benefiting canine initiatives for public safety, was held in honor of Barr’s service, with visitors cramming into and around the brewery, and packing cars all up and down the streets in its vicinity, as many of Barr’s local K-9 officer colleagues performed demonstrations for the crowd.

“We, along with this great community, are mourning the loss of beloved Officer Barr,” the brewery posted of its decision to keep the event on its original date following Barr’s death and to dedicate it to his memory. “We know Officer Barr dearly loved his K9, Molly; was a big proponent of expanding K9 units everywhere; and was really looking forward to this event and what it stood for. We, along with the Cayce Police Department, believe this is what Officer Barr would want and we will work hard to honor him.”

Cayce Mayor Partin remarked on the support shown by the Cayce community and its neighbors in the wake of Barr’s killing in a Facebook post after the funeral.

“Love… an absolute, overwhelming outpouring,” she writes of the scene leaving the funeral, “the sea of Police, Fire and EMT personnel standing at attention, at least 20 deep, on both sides, as soon as we stepped out of the Service, the whole way down the stairs, down the sidewalk, and all the way to the Monetta Firetruck, to honor Drew and his family as his casket was accompanied to the gravesite.”

Previous Responses to House Where Barr Was Killed

Incident reports provided to the Chronicle by the Cayce Police Department show that officers responded to the 118 Rossmore Dr. residence of Austin Leigh Henderson twice in 2020 before Cayce Police Officer Drew Barr was shot and killed responding to a domestic disturbance there last month.

Henderson, who later took his own life after barricading himself inside the home for seven hours, is the suspected murderer in the April 24 incident.

The second of the two 2020 visits by Columbia Police involved Barr responding to a family dispute on Aug. 7.

Heavy redaction in the reports obscures the identities of the parties involved beyond the officers who responded.

In his report, Barr records claims that the parties involved in the dispute got into an argument earlier in the day “over using cups to water plants” and that drinking was involved. Barr notes damage to a rear screen door caused by someone attempting to gain entry to the house.

Records for a case filed in Lexington County court on Aug. 10 list Henderon and his wife, Kristin, as the plaintiffs against Rebecca Ann Henderson. The case is listed as “dismissed with prejudice.”

The other 2020 response by Cayce Police to 118 Rossmore Dr. came on Jan. 13 and was in reference to a “resident at the address with suicidal thoughts and making statmements of wanting to kill [redacted].”

The report mentions a history of undiagnosed mental health issues on the part of one of the parties found by officers at the residence and records a claim made by one of the parties that drinking was a contributing factor in the Jan. 13 incident.