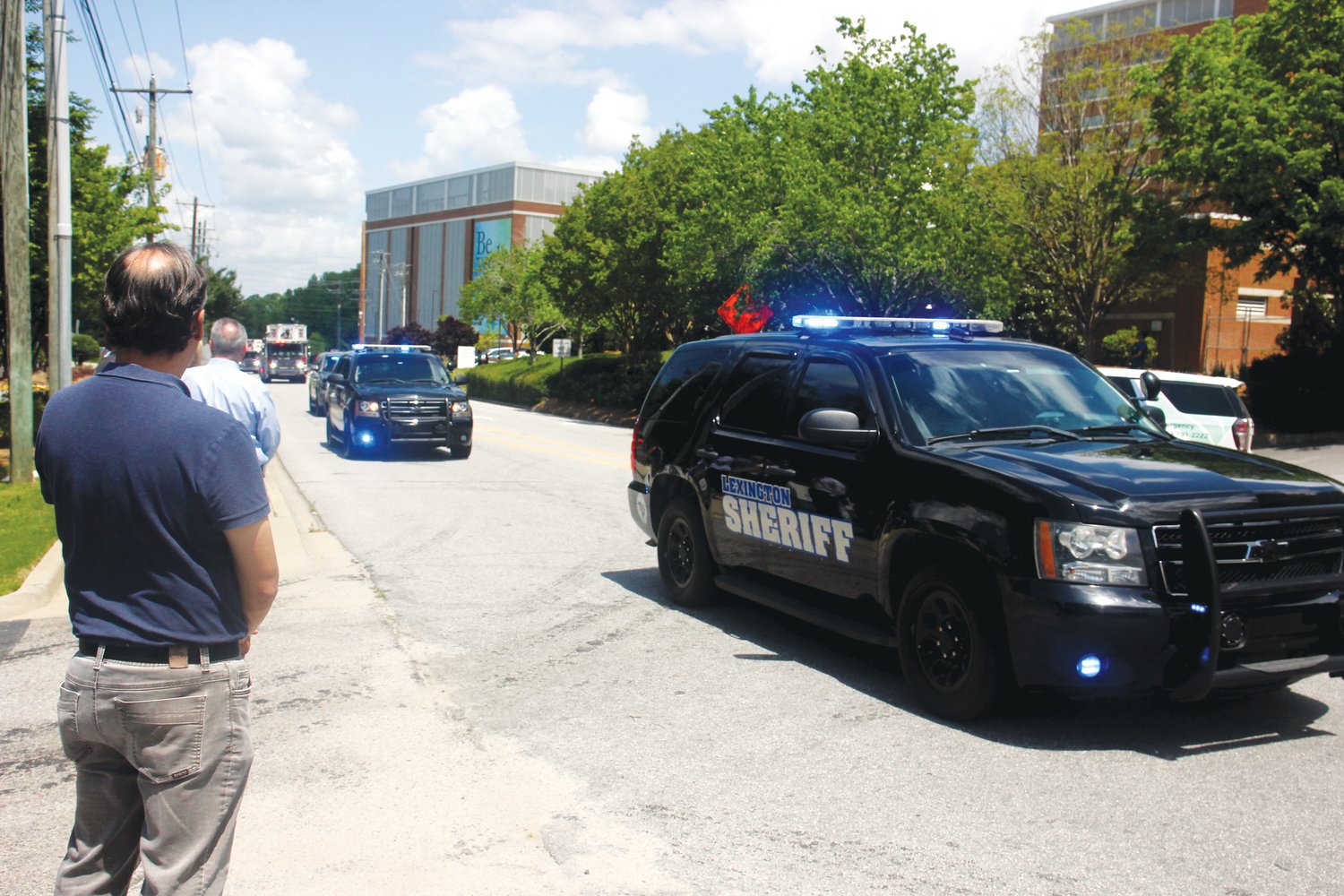 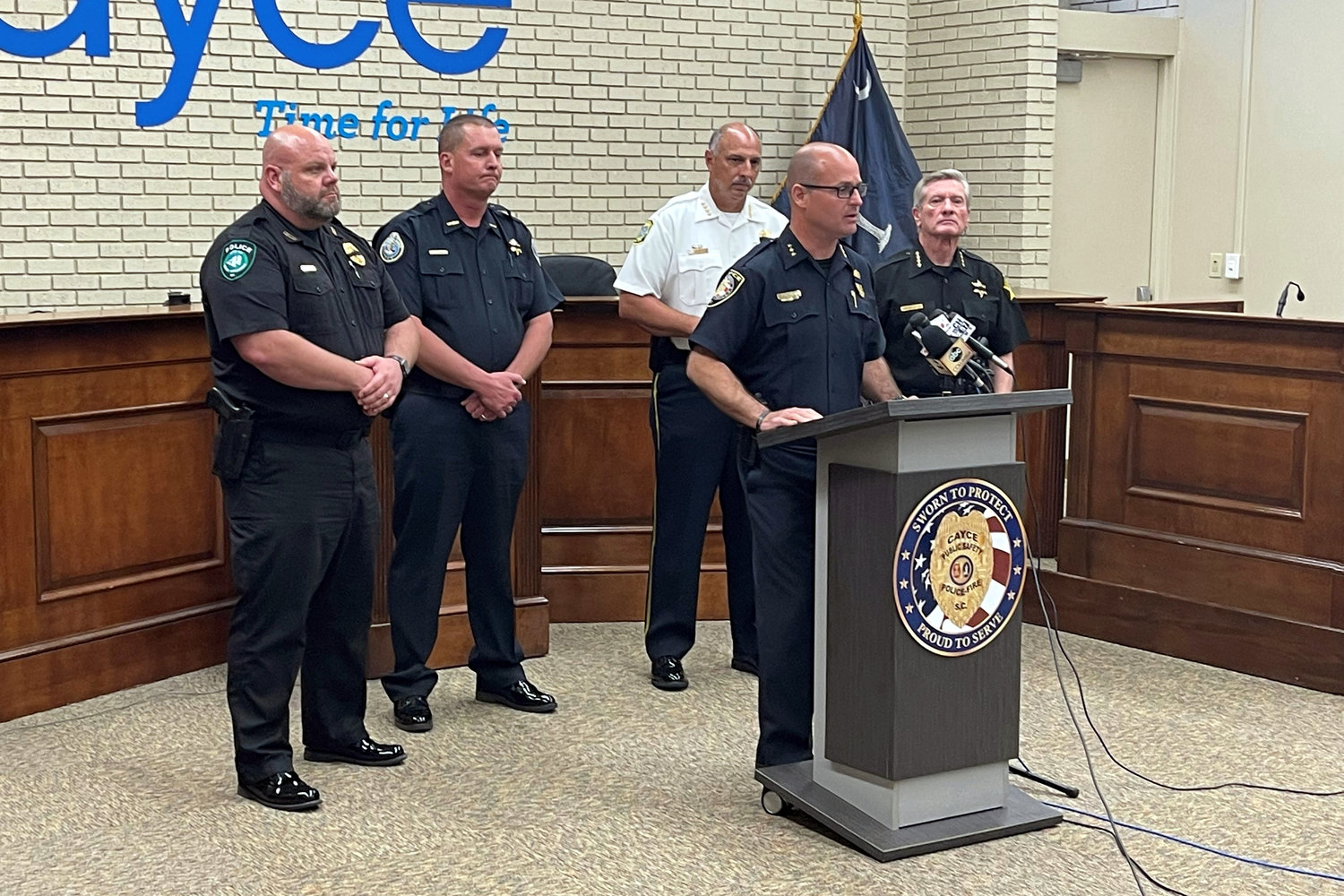 Cayce Police Officer Roy Andrew “Drew” Barr was gunned down within minutes after arriving on scene at a domestic dispute, authorities disclosed at an April 26 press conference.

“I want to be very specific about what I’m about to say,” Cayce Police Chief Chris Cowan said at the Cayce Municipal Building. “Drew was murdered. He was murdered. There’s no ifs ands or buts about that.”

Cowan spoke to reporters while heads of other area law enforcement agencies involved in the shooting and a subsequent seven-hour standoff with suspected murderer Austin Leigh Henderson, who ultimately took his own life after barricading himself inside the home, stood behind him in support. Present were West Columbia Police Chief Marion Boyce, Columbia Police Chief Skip Holbrook and Sheriffs Jay Koon of Lexington County and Sheriff Leon Lott of Richland County, who stood in silent support while Cowan shared details about the shooting.

In the wake of Barr’s death, these and other local law enforcement agencies have shown continuous support for the Cayce Police. When the fallen officer’s body was moved April 25 from the Lexington County Coroner’s Office to Lexington Medical Center and then to a funeral home, a wide range of public safety vehicles provided escort in a long motorcade.

“We responded at 2:48 a.m. to 118 Rossmore Dr. to a domestic disturbance with a man, specifically a man with a rifle, and we know that the woman inside the house called from her Apple phone, her Apple watch,” Cowan said at the press conference.

Cayce Police Department incident reports, provided to the Chronicle, offer more detail. They state that the incident was referred to the state Law Enforcement Division and the county coroner’s office for further investigation.

A release from SLED stated that it would release no further information while the investigation is ongoing.

“Based upon the 911 call, the Victim, Kristin Henderson, reported that her husband, Austin Leigh Henderson was armed with a rifle, and pointed the rifle at her and her three year old daughter.”

Cowan said that Barr was the second officer to arrive on scene.

“A third and a fourth officer also arrived,” Cowan said. “A man [identified in incident reports as Mendal Gladden] met us in the front yard. He was a family friend. We know that he was there. We know that he had been involved in a party most of the day. And we know that he left the home because it was a domestic that occurred inside the home. He was uncomfortable. He felt like he had to leave. He was handcuffed in the yard by one of our officers.”

The reports also show a history of incidents at the home dating back to 2020.

Incident reports say that Gladden was handcuffed during an investigative detention.

“We know that Austin, the suspect, moved upstairs to an elevated position with a rifle and tracked our officers as they pulled in. We know that he made a calculated decision to shoot at our officers and fire one round, striking Drew, killing him,” Cowan said.

Cowan said his officers called for help and multiple agencies responded as Henderson barricaded himself inside the home.

“We know at some point he moved the wife and daughter and placed them into a closet inside the home.” the chief said.

The reports offer more detail on the standoff:

“Tactical teams from the Lexington County Sheriff’s Department and State Law Enforcement Division responded and secured a perimeter around the residence. Columbia Police Department officers continued to negotiate with A. Henderson during which time officers heard a single gunshot from inside of the residence. Officers entered the residence and found Henderson was deceased. Based on information obtained from K Henderson, and through the course of the negotiations, A Henderson was alone in the residence when the shot was fired.”

Jordan Lawrence contributed to this report.