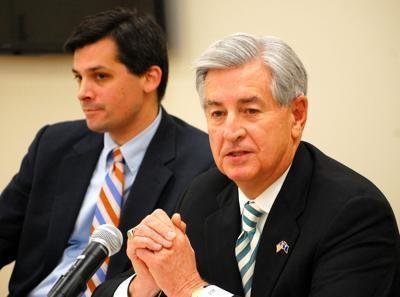 By Sen. Shane Massey
Special to the Chronicle
South Carolina’s election laws are strong and fair.
That was evident in 2020 with a record turnout and confidence in the results.
Major issues that must be addressed:
• SC Election Commission Chairman John Wells and his 4 commissioners failed to defend our election laws.
• Gov. Henry McMaster refused to hold the commission accountable.

Last year our election laws were challenged 5 times in federal court and once in state court.
One lawsuit alleged that some counties were improperly verifying signatures on absentee ballots and inconsistently addressing signature discrepancies.
In response, the House of Representatives passed legislation to give the State Election Commission “plenary authority.”
That meant complete and absolute power to ensure consistent application and enforcement of election laws.
The problem is not that the commission lacks authority to enforce the law.
The problem is they don’t.
State law already requires the commission’s director Marci Adano to communicate with county offices, supervise their conduct, and ensure they comply with the law.
If county officials refuse to comply, the commission can revoke local officials’ credentials and recommend firing them.

State law allows voters to return absentee ballots in person.
Those ballots must be delivered to election officials to confirm the returner’s identity and must be stored in a locked box inside the office.
This law combats ballot harvesting and it’s why we do not allow drop boxes.
The director knew state law prohibits drop boxes. She knew some counties used them anyway.
She did not stop it.
In March 2020, 6 weeks before last year’s statewide primaries, she recommended that legislators:
• Remove the witness signature requirement for absentee ballots.
• Allow all voters to vote by mail.
• Mailing ballots to all registered voters.
• Allowing voters to return their ballots at drop boxes.
That letter was later used against South Carolina in federal court.
State law requiring absentee ballots to have a witness signature deters fraud and helps law enforcement investigate fraud claims.
The federal plaintiffs asked the court to eliminate that requirement for last year’s primaries.
The Election Commission was clearly opposed to the law and put up a tepid defense.
The court struck the witness requirement.
The commission did not appeal.

Consequently, absentee voters were not required to have a witness signature for the 2020 primaries.
In another federal suit, the plaintiffs claimed that requiring absentee voters to put a stamp on the return envelope was the equivalent of a poll tax.
After receiving approval from McMaster’s office, the commission agreed to provide postage-paid envelopes to absentee voters.
In July 2020, the commission director wrote a 2nd letter to lawmakers again recommending they remove the witness requirement, allow drop boxes and establish a vote-by-mail program.
That letter was used as the basis for a lawsuit filed in state court.
The federal plaintiffs then asked the court to eliminate the witness requirement for November’s general election.
When the federal district court again struck the witness requirement, President Harvey Peeler and Speaker Jay Lucas appealed and the US Supreme Court upheld the witness requirement.
How did the commissioners and director get their jobs? Who supervises them?
Current law allows the governor to appoint and supervise all 5 commissioners.
The commission selects the director.
There is no other check.
Despite last year’s actions, McMaster has made no changes. All commissioners and the director still have their jobs.

The Senate recently passed legislation to require Senate advice and consent for all commission appointments and the executive director. McMaster called the Senate’s action a “power grab.”
Requiring advice and consent merely treats the commission and its director like nearly every state agency, an important part of the framers’ system of checks and balances.
It’s especially important when the governor is disengaged.
South Carolina’s election laws are strong. But those charged with enforcing and defending our laws have been weak.
That’s the problem we all have to fix.
Republican Majority Leader Shane Massey represents western Lexington County in the SC Senate.