We live in enlightened times.

High speed printing and the internet have made communications and publishing accessible almost everywhere.

Reading today is more critical than ever. 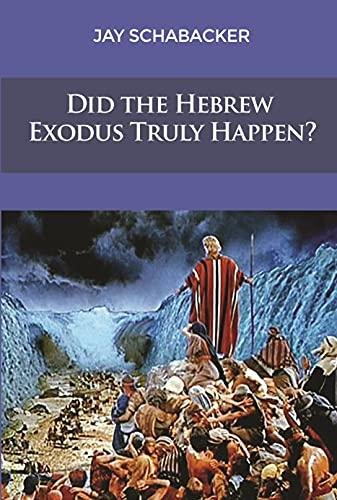 We live in enlightened times.
High speed printing and the internet have made communications and publishing accessible almost everywhere.
Reading today is more critical than ever.
Successful people read not only a lot and often but are careful about what they read.
One of my favorite authors, Jim Rohn, once said unsuccessful people have big TVs. Successful ones have big libraries.
Local author Jay Schabacker, a former aerospace engineer and Biblical scholar, has just published a new book, “Did the Hebrew Exodus Truly Happen?”
“There have always been questions and controversy about the Biblical events involving the Exodus,” Jay writes. Is the Exodus story true or as many say was it a myth?
Many self-styled debunkers including hate monger Louis Farrakhan and Muslims who challenge the existence of the State of Isrlael deny the entire story of Moses, the Passover, the Hebrew slaves escape from Egyptian bondage, the parting of the Red Sea, the 10 Commandments on Mount Sinai, the Promised Land and other miracles as lies.
“These questions sap our faith and the strength of Christianity in the United States. Hence, a healthy culture in the United States is on the ebb, and we need to do something about it,” Jay says.
Jay has come up with archaeological and scientific research that establishes that the Hebrew Exodus truly did happen,
Eqyptian chronology varies greatly among the different Biblical dating systems, and that is a main reason even well-respected researchers in the past have come up with different conclusions.
Some scholars claim God’s parting of the Red Sea story is untrue and that Moses led the Hebrews on a different route.
Some argue about the dates of Joseph’s exile to Egypt, whether he actually became a pharaoh himself, the years the Hebrews were enslaved and the dates that specific pharaohs ruled over the Egyptians.
“Egyptian historians have little reason to show the public their past weaknesses,”
Jay says of their enslavement of Hebrews.
“Was there really a pharaoh of the exodus? Some researchers even speculate that Moses was the pharaoh of the exodus.
“But do we now have new knowledge of Hebrew slaves in Egypt, knowledge of a pharaoh around that time who could have drowned in the Red Sea and knowledge of Egyptian record keepers who reported about major chaos in Egypt?
“The answers are - yes, yes, yes.”
Jay hopes his book will put you and your family in a new positive mood and change the world around you for the better.
Please write if you have a comment or story from your own life to share to JerryBellune@yahoo.com
Next:  A Snowball’s Chance

An offer for you
Jerry Bellune’s new $9.99 digital book, “The Art of Compelling Writing,” is available now at Amazon.com. Chronicle readers can get a copy for $4.99 by emailing him at JerryBellune@yahoo.com