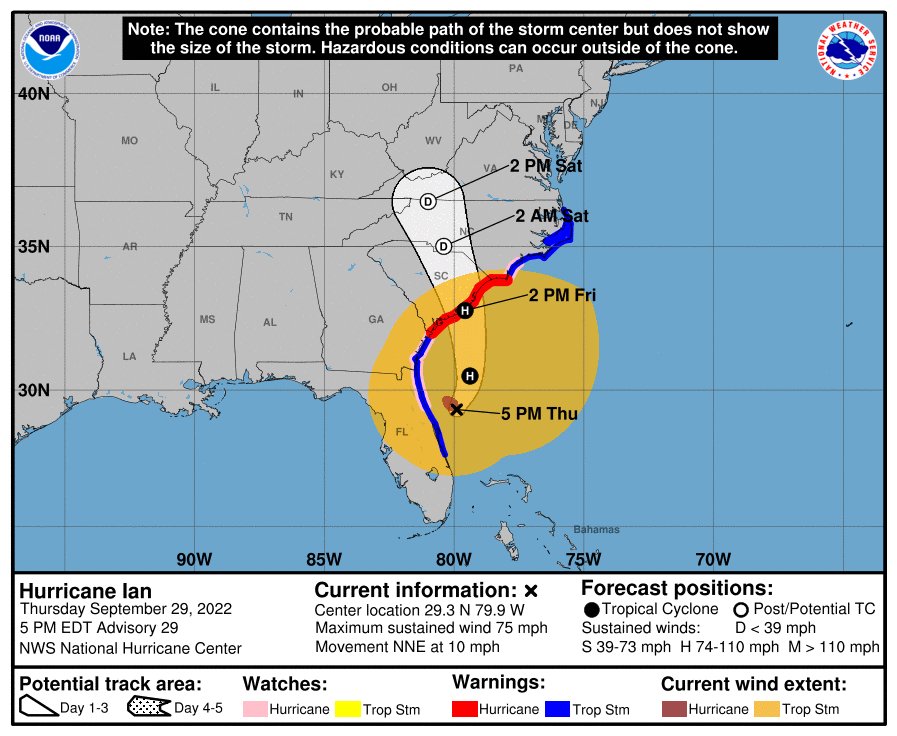 Hurricane Ian is indeed a hurricane again, and it’s coming for South Carolina.

During a briefing from Gov. Henry McMaster that started a little after 4 p.m. Thursday, John Quagliariello, warning coordination meteorologist at NWS Columbia, said Ian, then a tropical storm, is set to make landfall along the north or central S.C. coast as a Category 1 hurricane during the day Friday.

Shoftly after the briefing, the NWS confirmed that Ian had restrengthened to a hurricane.

If it retains its strength, it will be the first hurricane to make landfall in South Carolina since Hurricane Matthew in 2016.

Quagliariello said tropical storm force winds should begin to hit the state Friday morning, and impacts from the storm in South Carolina should subside Friday evening heading into Saturday morning.

McMaster emphasized at the briefing that he has not ordered any any closings, evacuations or lane reversals in response to the storm.

Conditions inland should be less severe than they are on the coast.

Per the latest NWS wind forecasts, peak winds in Lexington County are anticipated to be between 20 and 30 mph with gusts up to 60 mph. The county is anticipated to get between three and six inches of rain with some areas potentially seeing higher amounts.

“Emergency plans should include the potential for major flooding from heavy rain.”

A tropical storm warning is in effect in Lexington County.

The threat of the storm has already forced the cancellation of events, including the Lower Saluda Craft Beer Fest on Friday and the Gaston Collard and BBQ Festival and Cayce Fall Fest on Saturday. All high school football games involving Chronicle Country teams were moved to Sept. 28 (Wednesday) and 29 (Thursday).

Lexington County School Districts 1, 2, 3 and 4 and Lexington-Richland District 5 have announced that Friday, Sept. 30, will be an e-learning day for their students, and Midlands Technical College will close that day.

West Columbia is closing all of its parks Friday until further notice; the Riverwalk Park and Amphitheater, Folwer Park and Butler Park closed early on Thursday. Saturday's Meeting Street Artisan Market is canceled.