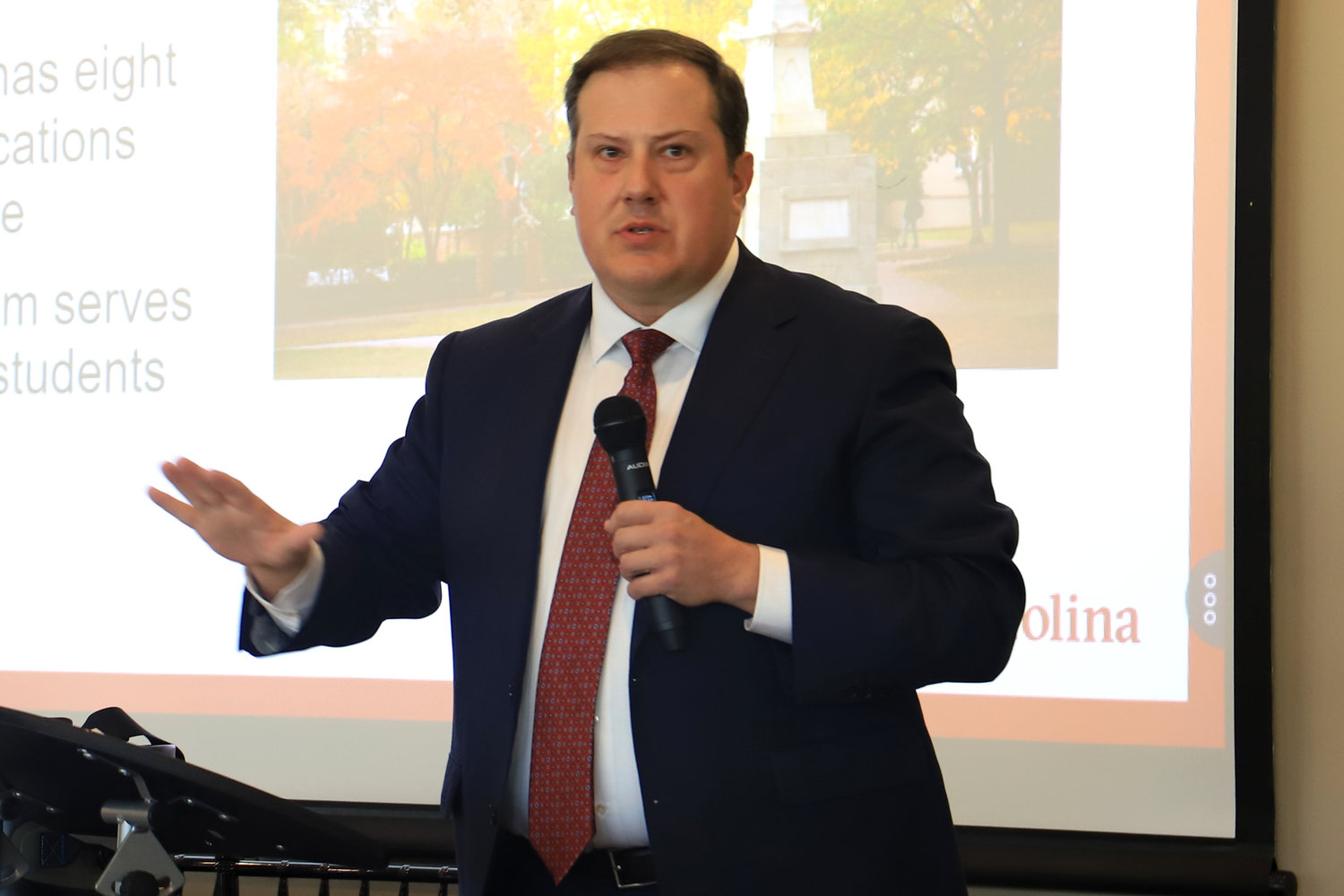 Attendees at the last Greater Cayce West Columbia Chamber of Commerce Business Breakfast Meeting for the year heard from the new leader of the University of South Carolina’s governing board.

He took questions at the Nov. 22 meeting, saying he didn’t want to avoid controversial topics.

Westbrook touched on the state Legislature’s spring efforts to reorganize the board that governs the USC system after the controversial hiring and departure of previous university president, Bob Caslen, who resigned after plagiarizing part of a graduation speech, and questions about the search process that ultimately led to the hiring of the university’s new president, Michael Amiridis, in January.

“The legislation didn’t pass and it died at the time at the end of that session. But we’ve had some change, not only with the new president,” Westbrook said. “I was elected as the new chairman about three months ago, and we have a new vice chair as well. And things are going very well. With the new president, we've seen not only a growth in what's going on with our students and our research, but also a lot more excitement about where things are at the university.”

He added that while some questioned the search committee not publicly revealing the candidates it was considering, this was to allow the university to consider sitting heads of other academic institutions, whose own boards wouldn’t have taken kindly to seeing their leader openly vying for another job.

Westbrook also spoke about the potential impact of a $20 million state-of-the-art nursing simulation center for the university that is being built by Lexington Medical Center across from its West Columbia campus.

“We have a shortage of nurses in this state,” he said. “We need as many as we can and Lexington Medical Center is really helping us out in filling that need for the state.”

A stretch of a main Lexington County road has been renamed for a state Highway Patrol officer who died 35 years ago.

According to the program from a Nov. 16 ceremony at Lexington Town Hall to unveil the highway signs before they were placed along U.S. Highway 1, Trooper First Class Robert Paul Perry, Jr. was killed in the line of duty April 15, 1987.

The stretch of U.S. 1 from Interstate 20 to the Town of Lexington now bears his name, thanks to a concurrent resolution from the state Legislature.

“Perry was a four-year veteran of the South Carolina Highway Patrol,” the resolution reads. “He was pursuing a motorcycle on Muddy Creek Road in Williamsburg County when the pursuit entered an area of Muddy Creek Road and Snow Lake Road, which was unpaved. Trooper First Class Perry lost control of his patrol car, striking a small bridge and a tree. He died from injuries sustained in the crash.”

Perry’s nephew, Robert Perry Mangum, delivered the family response to the highway dedication, taking the opportunity to speak out against efforts to defund law enforcement, with Williams re-emphasizing the sentiment in his closing remarks.

“I want to make it very clear today that it is incumbent on all of you, but especially those who hold elected office, to not silently ignore or to listen and learn from this rhetoric, but to forcefully denounce it,” Mangum said. “It is un-American and incompatible with civil society. And families like mine, who know what it's like to lose a loved one line of duty, are the ones who suffer in silence when this rhetoric goes unrebutted.” — Jordan Lawrence

On Nov. 22 the 1963 Class AA state champion Lakeview High School Football had the newly renovated athletic field dedicated in their honor by the Brookland-Lakeview Empowerment Center, which now occupies the former school.

The dedication commemorated the success of the previously segregated school. The ceremonial handoff included a Lakeview football alum and a youth AAU player, an attempt to bring generations together.

According to a document sent by Cindye Richburg-Cotton, executive director of the  center, in 1943, work began to launch an organized football team program at the school. Miles David (M.D.) Bogan, a former principal of Lakeview, and staff members managed to get a team that could play in the 1944 season despite very little funding.

“This athletic field was renovated through the help of all of the grants and donations, and partnerships with Dominion Energy, so that we would be able to provide recreational services to people in this community," Richburg-Cotton said. "This field will allow us to be able to offer these services to people in the community, the field has a walking track and can be used for soccer, football, volleyball, any type of sport so it is the community field”

During this first season, the field was coined the “Dust Bowl” by students and others due to the field's sandy and dusty condition.

The team managed to win the state championships in 1955 and 1963, with the team’s final season coming in 1967 due to the school district beginning to integrate.