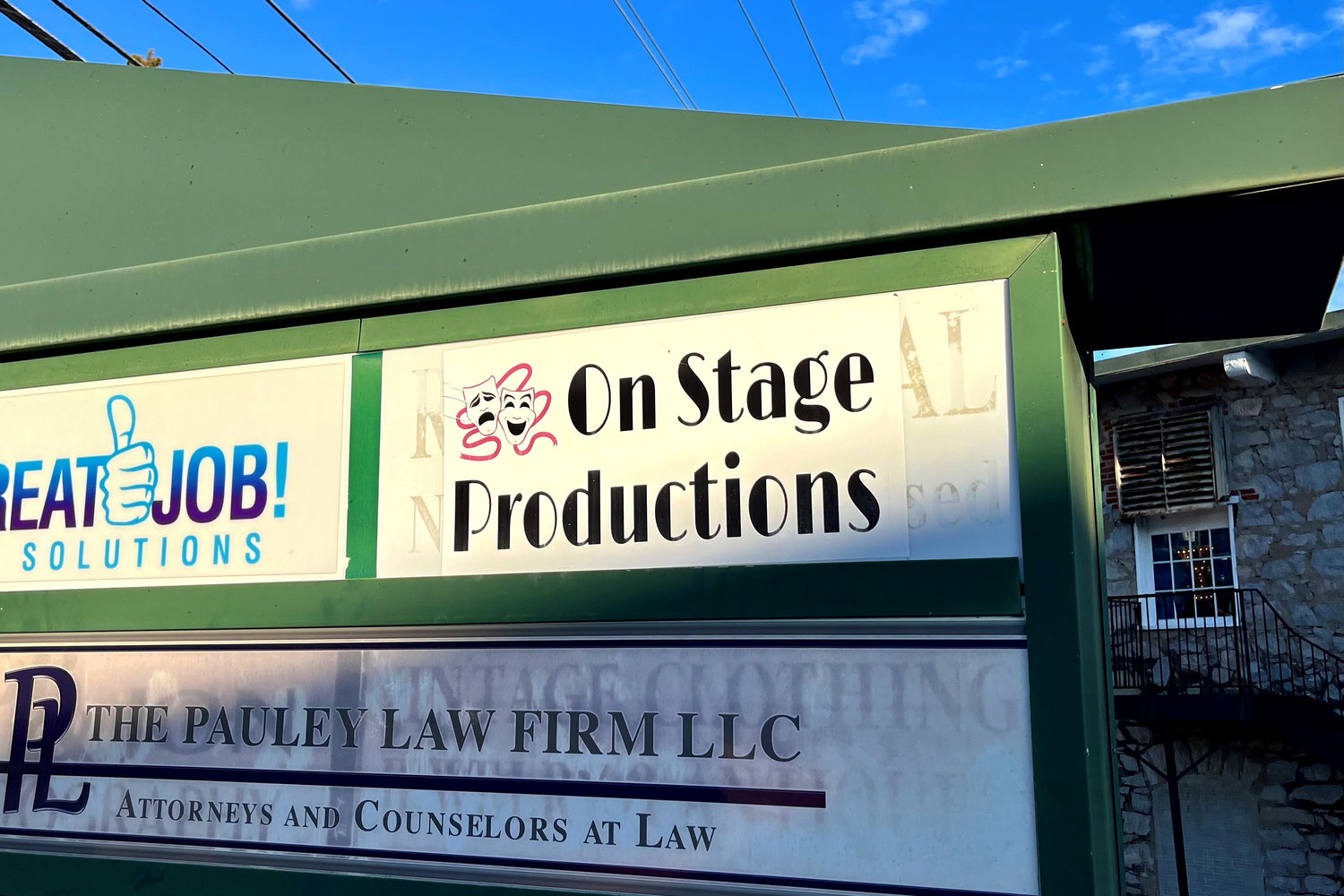 The sign for On Stage Productions is still up at Lexington's Old Mill.
Jordan Lawrence | Chronicle
Posted Tuesday, November 29, 2022 7:45 am
By Jordan Lawrence
jordan@lexingtonchronicle.com

Executive Director Robert Harrelson told the Chronicle that he’s moving On Stage Productions, which he founded in the town 14 years ago, to Myrtle Beach, where it will share a theater space with two other groups.

The move was prompted by an offer from Dream House Theatre, which will allow him to help out with the box office while hosting ongoing On Stage programming in the space. He said the offer was attractive, particularly with the competition he has had to face while putting on productions in the Columbia area.

“It’s hard to continue to compete being a small theater like we were,” Harrelson said, pointing to the crowded Midlands theater landscape, which has a professional company in Columbia’s Trustus Theatre as well as several community theater operations bigger than On Stage, including Lexington’s Village Square and Columbia’s Town Theatre, and more targeted operations like the Columbia Children’s Theatre.

The COVID-19 pandemic had already taken its toll on the company. The challenges it brought forced On Stage to vacate its space in Lexington’s Old Mill, relocating business operations to an office in West Columbia and embracing a nomadic existence, placing its productions in a variety of different venues.

But Harrelson said On Stage recently found itself again struggling to secure space. The Main Course in Columbia, where the company had started to host dinner theater productions, was repurposed by its owners earlier this year, and the Old Mill Brewpub, where Harrelson started hosting dinner theater productions, cut back on its hours, making it difficult to fit in his programming.

This left the option of renting space at West Columbia’s Alegria Dance Studio, the cost of which proved difficult. With the dinner theater productions, Harrelson got the space for free, able to funnel the funds raised through tickets back into the company while the venues made money on food and drink.

A production of “Little Shop of Horrors,” which ran at Alegria from late-September to early-October, was On Stage’s last in the area.

While the challenges of continuing the company in the Midlands contributed to the decision to move, Harrelson emphasized that it was what Dream House offered that truly tipped the scales.

With three companies sharing the space, he will have guaranteed spots to plan On Stage performances while lessening his financial burdens. And teaming with the two other companies means he will have immediate connections to help him integrate into a new theater community.

“I like the way that they’re marketing it more within a collective,” he said of Dream House. “The dream that I’ve always tried to get somebody to do is to be able to say, ‘Hey, let’s talk about this, let’s market it together.’ And that’s what I think we’re going to be doing.”

The praise for what On Stage did for the area was strong when Harrelson announced the news on Facebook.

“Wishing you all the best in your new endeavors and adventures,” local theater fixture Jeff Sigley commented. “Thanks for allowing me to portray some of my favorite characters on stage. Keep us informed about your future productions ... you might just get a caravan from Lexington come see one of your shows!”

“Thank you for impacting so many people including myself,” student actor McKenna Myers commented. “I will always be grateful for what you’ve taught me and the memories I’ve made through OSP.”

Harrelson — who invested in local community theater when he moved back home from New York, where he owned a theater company and directed several off-Broadway shows — said it was a tough decision to move On Stage, and that he hopes to continue helping the community here. He specifically mentioned his desire to continue a student summer program that includes a trip to Disney World.

“It's been extraordinary,” he said of his experience across the last 14 years. “I've met so many people that became family, it's like an extended family.”